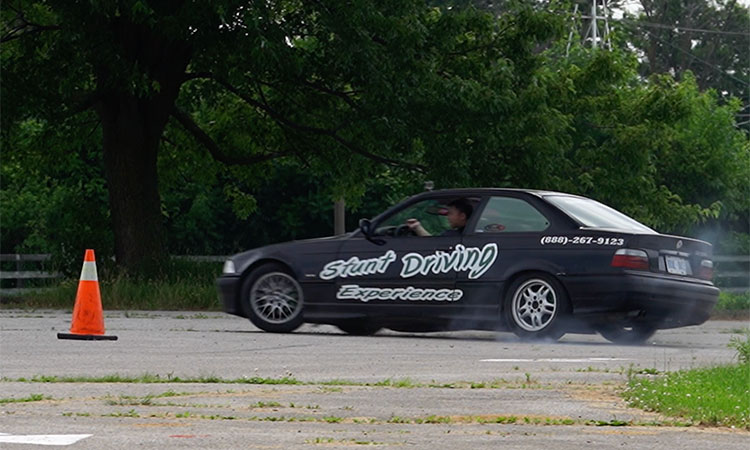 What would an action movie be without car stunts? It’s the car stunts that keep us on the edge of our seats. If you’ve ever thought about learning some of the car stunts you’ve seen over the years, then here’s four of the most important stunts that you’ll need to master to become a great stunt driver.

Always a delight to watch, ‘skiing‘ stunt is where a driver goes up on two wheels of the passenger side of the car and proceeds to continue driving on two wheels. It is a difficult balancing act that requires a lot of precision driving. There is usually a ramp involved that puts the car up on its side. The driver must then maintain the balance through steering alone.

One of the most famous ‘skiing’ stunts is in the movie Transporter 3 when Jason Statham’s character drives between two trucks.  It is a spectacular stunt.

As stated by Wikipedia” The handbrake turn (also known as the bootlegger’s turn) is a driving technique used to deliberately slide a car sideways, either for the purpose of quickly negotiating a very tight bend, or for turning around well within the vehicle’s own turning circle.” In other words, the turn spins the car in a very tight circle allowing the driver to go in the opposite direction without using very much space. It is sometimes used for tight parallel parking as well, where a driver can demonstrate precision driving in minimal spaces.

Here’s an example of a handbrake turn in action with an attempt to set a new Guiness World record for the tightest parallel park.

James Garner played Jim Rockford in the Seventies TV show “The Rockford Files.” His signature move was the reverse 180 stunt. Rockford would leave the scene in his Camaro by reversing at full speed. Then using the handbrake and twisting the wheel, the car would spin 180 degrees and Rockford would then hit the gas and speed off into the distance. Although the Reverse 180 stunt has been used in many movies since, it is often called the “Rockford Turn” because James Garner made it famous. Here’s the complete compilation of all the turns made in the TV series.

The ability to drift is a critical skill for all stunt drivers. Countless movies and TV shows have scenes where the driver drifts left or right through an intersection. It is usually a chase scene, with a police car also drifting through the same intersection (and often failing to complete the drift allowing the first car to escape).

One of the movies that took the stunt to the extreme level was The Fast and the Furious: Tokyo Drift. Here’s a scene from the movie showing many of the different ways to drift through the city.